Any self-respecting watch collector will want to know what makes their timepieces tick. A person with an eye for detail will surely appreciate the mechanism that runs inside the case.

Between watch manufacturers, you can find countless watch movements available and many of them are proprietary creations. However, all watch movements can be broken down to two major categories – Quartz and Mechanical.

The advent of quartz crystal movement (typically shortened to quartz) is attributed to Seiko. It was Christmas Day in Tokyo when Seiko introduced the Astron, the very first quartz wristwatch. Quartz is a battery-powered movement which was groundbreaking at the time especially when compared to the traditional hairspring/balance wheel combination.

The announcement of the Astron was heard all over the world. By 1977, Seiko became the world’s largest watch company. It essentially kickstarted the era of battery-operated wristwatches. It certainly helped that quartz provided excellent accuracy and required no maintenance aside from battery replacements.

Quartz, in general, tend to be low cost due to very little moving parts and being battery-operated. However, watch enthusiasts find quartz timepieces to be less desirable due to the overall lack of craftsmanship and engineering.

But what exactly makes a movement a quartz movement?

To measure the time, watches that house the quartz movement need electrical current. The current, in this case, is supplied by the battery which acts as the main power source. The electrical signal is sent via a piece of crystal quartz which then vibrates at a rate of 32,768 times per second.

The crystal essentially becomes an oscillator. This oscillation helps to keep the time which replaces the function of the hairspring/balance wheel combo in a mechanical movement.

Even the humblest quartz wristwatch can maintain time accurate to within less than 1 second per day with the aid of inhibition compensation. And due to the surprisingly good stability of 32 kHz quartz crystal oscillators, the accuracy of quartz wristwatches can be expected to change by only a small amount over time.

More often than not, quartz-powered watches are far less expensive when compared to mechanical watches. However, there are also luxury watches that comes with a quartz movement such as the Longines Conquest VHP and Tissot PR100 COSC.

Most watch enthusiasts prefer mechanical movement for their luxury watches.

Simply put, mechanical movements boast a high level of quality and craftsmanship, expertly crafted by watch artisans. A mechanical movement features an intricate series of moving parts that working together to get the watch ticking. The intricate mechanism in mechanical watches can only be described as art.

A lot of in-house mechanical watches created by Swiss watchmakers have fetched hundreds of thousands or even millions of dollars during auctions. One notable example is the extremely rare Patek Philippe reference 2499, costing as much as $7 million dollars.

However, there are movement companies such as ETA that have managed to mass-produce mechanical movements for watchmaking purposes. This enabled smaller brands to make mechanical timepieces that can compete with leading luxury watch brands.

The general design of mechanical watches hasn’t changed over the years. However, the use of technology has allowed movement makers to improve precision and add a greater attention to detail to their creations. 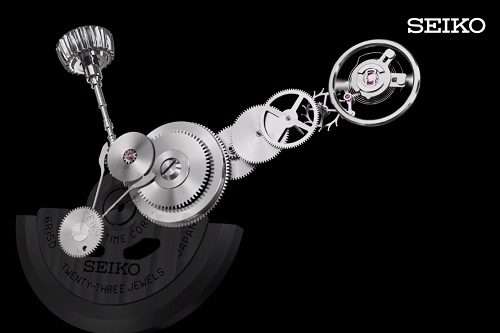 All mechanical timepieces uses the combination of hairspring and balance wheel.

Unlike quartz watches, a mechanical model utilizes energy from a wound spring instead of a battery. The spring will then transfer the energy via the springs and gears within the movement. This component powers the overall function of the watch including the hands and complications.

The oscillation of the balance wheel results in a back and forth motion which is not unlike the movement of a pendulum. For a mechanical watch to function continuously, the spring has to be wound with regular frequency.

Manual movement is the oldest type of watch movement in existence. They are also referred to as “hand-wound movements.” Manual watches are more desirable to collectors because they display the watch movements in full glory through the case-back.

As the name implies, a watch powered by a manual movement necessitates the winding up of the piece on a regular basis. This may well be the deciding factor as to why one would refuse to buy a manual watch.

However, for enthusiasts who treat their timepieces as more than just a timekeeping tool, the process of winding the watch becomes a veritable ritual. This adds a level of intimacy with their time measuring companion and improves the overall experience of owning the watch.

A manual watch gets its energy through the winding stem. When you talk about winding the watch, it refers to the action of turning the winding stem which tightens the mainspring. The mainspring then accumulates the energy which transmits to the hands and complications.

The balance wheel is responsible for keeping regular time. The wheel swings in a back and forth motion and interacts with the escapement. The motion transmits to the gears which power the hands.

The escapement is the part that transfers energy to the wheel so the latter oscillates at a given rate. The oscillation is what the wearer can hear as the ticking sound.

To wind the mainspring, the user simply needs to turn the crown several times.

Up to this day, the question of who invented the automatic movement is still up for debate. Some folks say it’s Abraham-Louis Perrelet and some believe that the inventor is Hubert Sarton. Either way, that will be a debate for another day.

The automatic movement is the next logical step after the hand-wound movement. Without the need to manually wind the timepiece at least once every other day, it’s easy to see why. The motion of the arm is enough to keep the watch wound.

Basically, as long as you have it on your wrist, the watch will keep ticking.

For the most part, an automatic movement works in the same way as manual systems do – save for the addition of a metal weight called the rotor.

To understand how an automatic movement works, it’s important to know about the most important components.

As mentioned earlier, the rotor is what sets the automatic movement apart from the manual. The rotor is a semi-circular weight which connects to the movement. The rotor can freely move in a 360° direction and it goes with the watch’s movement on the wrist.

The reverser mechanism is another essential component that sits between the gears and rotor. This part enables the rotor to rotate the mainspring regardless of the direction it turns.

There’s also the escapement which essentially “divides” the time in equal fractions. This is the component that releases the energy supplied by the gears to the lever.

Modern automatic watches come with a power reserve that allows you to take them off without worrying that it will run out of power. For instance, a watch with a 72-hour power reserve can remain in your nightstand for close to three days and it will still be ticking once you wear it again.

How to Tell the Differences Between Mechanical & Quartz?

Watch manufacturers are continuously innovating to improve the quartz technology. They continue to improve the crystal’s frequency so it mimics the smooth motion of mechanical watches. With that said, the little tip above might not be applicable anymore.

Which Movement is Right for You?

As you can see, each type of watch movement has its fair share of pros and cons. It all comes down to personal preference between a “purist” view of watchmaking and convenience. It’s also good to consider how you will use your watch.

If you are looking for an affordable timepiece that you can essentially set-and-forget, you are better off with a quartz watch. It is also going to be more accurate and requires little to no maintenance.

On the other hand, if you value the art of horology and drawn to the elegance of micro-mechanical movements, then a mechanical watch is a no-brainer.

Regardless of your choice, the choice between quartz and mechanical movement says a lot about a person’s individuality. Hopefully, this guide has helped you better understand watch movements and the differences between mechanical & quartz movements.