Microbrands excite me because they offer a wide range of watches that are not just high-quality but feature unique designs as well. As of late, I’ve been getting into microbrands and some of the best microbrand watches I’ve seen are truly stellar.

Vostok isn’t exactly your typical microbrand since it has been around since the 1940s. Based on their track record, their watches have every right to be called classics. 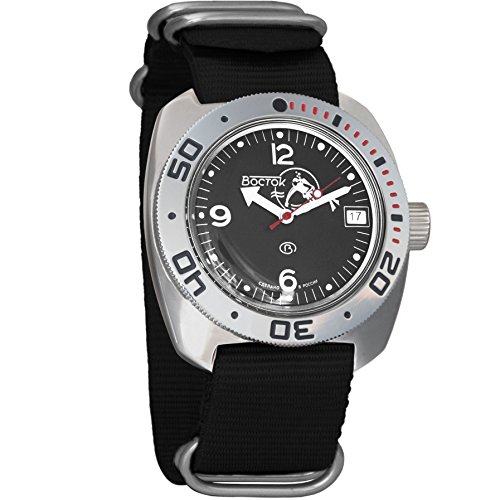 Today, we have a Vostok watches review for you. We’ll talk about the history of the brand, its pros and cons, and the best watch models.

The History of Vostok Watches 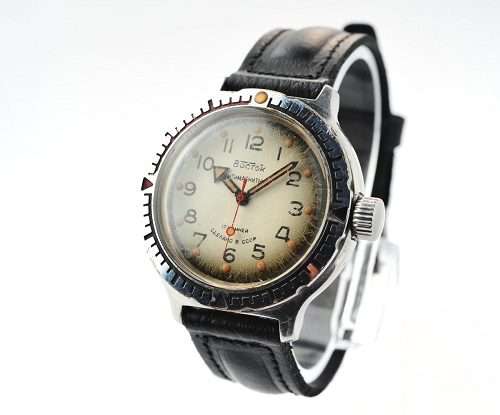 The Vostok Watch Makers, Inc. was founded back in 1942. This was made possible when one of the Moscow watch-making plants of the First Moscow Watch Factory was transferred to a small town called Chistopol. It’s interesting to note that the plants only made defense equipment during the war. However, once the war as ended, the company moved on to make mechanical watches.

In 1965, the company was commissioned to be the official supplier of the Ministry of Defence of the Soviet Union. It was also the same year when the famous Komandirskie (“Commander’s”) watch was released. It wasn’t long before the creation of Amphibia, a stainless steel diving watch.

By the year 1980, the Vostok Watch Makers company was putting out 4.5 million watches a year.

At the turn of the 21st century, Vostok has tried its hand in making luxury watches for the more affluent customers. In the year 2004, they began supplying movements to the Koliz Company of Lithuania, the makers of the Vostok Europe brand.

In 2010, Vostok filed for bankruptcy and their official site became inaccessible. However, the company was restructured and resumed making watches and movements.

Are Vostok watches worth your time and money? We outline what we love and don’t love about this timepiece brand.

For a relatively unknown brand (at least in the U.S.), Vostok boasts a rich history. It’s not a brand that’s born out of a crowd-funding campaign (not a dig to crowd-funded watch brands), these watchmakers have a proper history and wartime heritage.

The company’s heyday was back in the 1960s and ’70s. Back in the days of the USSR, Vostok watches are some of the best timepieces that you can get.

Considering its rich history and being one of the most notable Russian brands, it’s a shame that it’s not more popular. But I guess that it’s good that they are still producing watches up to this day.

While the brand didn’t exactly spark a watch revolution, some of Vostok’s original designs are still respected.

A good example of this is the venerable Vostok Amphibia. The traditional way to build a dive watch is to manufacture the case, crown, and crystal – all with a static water resistance rating. The Amphibia’s design is different because the watch’s resistance actually improves as the pressure around it increases.

Central to this innovative design is Vostok’s caseback. Instead of the usual screw down caseback, Vostok utilizes a bayonet-style caseback with a threaded locking ring. Along with the large gasket, the watch can handle greater pressures as the depth increases.

For a more comprehensive explanation of Vostok’s design methodology, I highly recommend that you check out this post.

Upon closer inspection, you can see that Vostok watches’ construction is different. The most obvious indicator of this is the crown. However, Vostok watches boast a solid feel that is comparable to some of the toughest G-Shock watches.

With that said, Vostok watches are excellent for daily wear. These are timepieces that you can wear without a care in the world – respectable beater watches indeed.

This brings us to the next point.

When it comes to value for money, Vostok watches are hard to beat. Many people are calling them the G-shock of automatic watches.

And I tend to agree.

As I’ve mentioned earlier in this Vostok watches review, these timepieces are tough and rugged. For instance, my Amphibia has been with me for a long while and it’s still alive and kicking. Sure, it has plenty of wear-and-tear signs but it never stopped working.

It’s a good thing that Vostok timepieces won’t cost you an arm and leg. They’re not the best-looking watches out there but they’re high-performance and comfortable. Good value proposition.

What We Don’t Love

When you purchase a Vostok watch and expect Rolex-esque quality control, you’re bound to be disappointed.

Despite the solid construction, many users are reporting about quality issues. For instance, one unit had a malfunctioning movement or downright inaccurate. Thus, you end up with a paperweight unless you have it serviced.

These inconsistencies seem to be quite common with all models of Vostok watches. If you can get a unit with a functioning movement, you’re in for a treat.

Not So Intuitive Design Elements


While Vostok had some pretty interesting design choices, not all of them is a home run.

One thing that I noted was the winding mechanism. I guess I was just spoiled with luxury watches but the winding mechanism of Vostok seems unintuitive and awkward. The crown is not that better too because it feels wobbly at times. Again, this can be attributed to the fact that Vostok watches have different construction than conventional watches.

Some of the design and construction elements do take a lot of getting used to.

If you love a brand that offers a wide range of watch models and designs, Vostok is not the brand for you.

At the top of my head, I can only name the Amphibian and Komandirskie when it comes to Vostok watches. Although both models offer many different iterations, the level of variety that I am looking for is just not there. I just wish that Vostok made more watches since they do cater to an interesting niche.

However, one can argue that having only a few models is a boon since choice paralysis becomes a non-issue. Coupled with Vostok watches’ affordable price tag, the level of entry for the brand is fairly low. 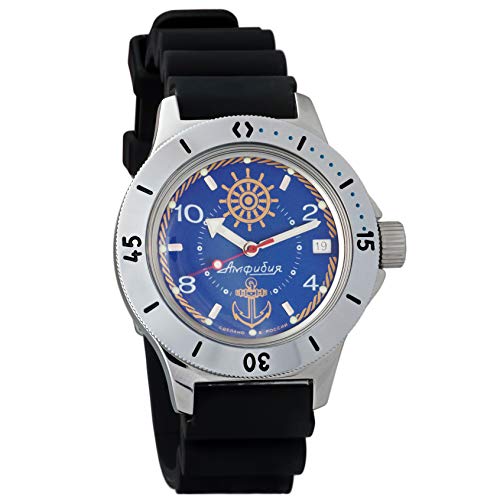 Movie and pop culture enthusiasts will recognize the Vostok Amphibia Zissou because it was worn by Bill Murray and the rest of Team Zissou in the quirky 2004 movie, The Life Aquatic with Steve Zissou. For the uninitiated, the movie follows the story of the washed-up oceanographer Steve Zissou (Bill Murray).

Like the character Zissou, the Vostok Amphibia Zissou is a wonderfully quirky and budget-friendly dive watch. When I pulled it out of the box, I was pleasantly surprised at how good-looking it is. However, I was also taken aback at how small it is. 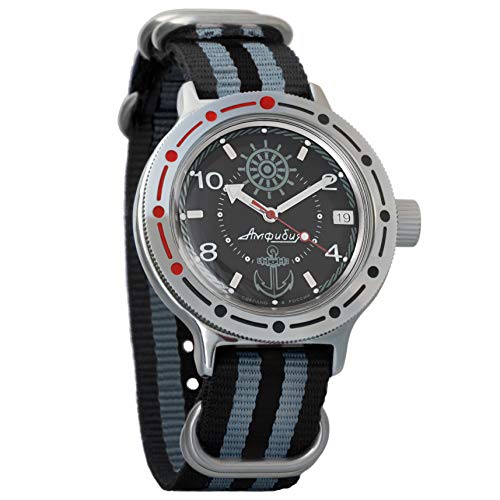 The nautical-themed dial is a winner in my book. The dial features a playful look without looking tacky. However, it does look flat and lacking in texture but that’s to be expected for a budget dive watch. The dial also features luminous markings but frankly, they’re quite poor.

The Vostok Amphibia Zissou is an excellent starting watch if you want to get your first mechanical model. I replaced mine with a NATO strap and it looks amazing. 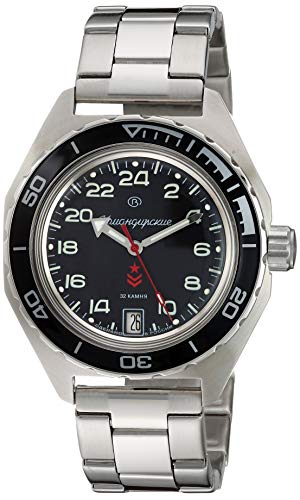 One of the first things you’ll notice about the Komandirskie is its 24h dial. Instead of the usual 1-12 Arabic numerals, the dial features 2-24 numerals which is a unique design choice. In fact, this is the only watch I’ve seen that comes with a 24-hour dial.

Needless to say, it takes a lot of getting used to.

If you can get past the 24-hour dial, you have a pretty rugged and functional wristwatch. It does have some weird or downright unintuitive quirks like the bezel. Instead of the usual clicking action like with most watch bezels, the Komandirskie’s bezel rotates freely. I am just so used to the tactile feel of conventional bezels. Plus, it’s easy to adjust the bezel by accident. 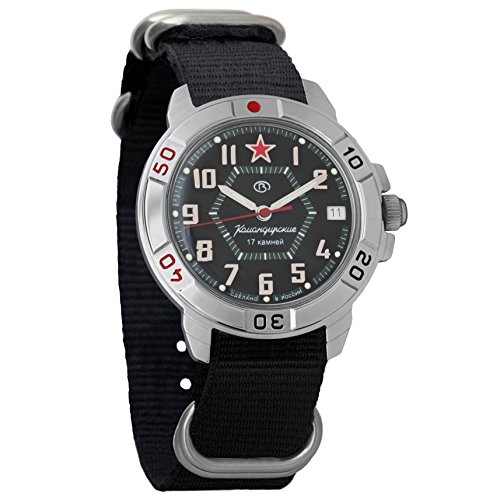 Again, the Vostok Komandirskie is an excellent beater watch. Mine looks properly used with scratches and dings but still looks great.

The Vostok Amphibia Scuba Dude is not exactly a new model for this list. However, it’s also different from the other Amphibia model featured earlier.

The main selling point of the Vostok Amphibia Scuba Dude is that it’s available in many different case designs. I got mine in Amphibia Blue and it came with the “420” case. It’s basically a round polished steel case with shortened lugs but no crown-guards. There’s also other case variants like the 090, 710, and the 110.

There’s quite a bit of thickness to the case and some may find it a bit tall as well. This seems to be the case if you opt for the NATO strap.

In addition, the design of the dial is also quirky but less so when compared to the Amphibia Zissou. The off-beat, retro-infused aesthetic is certainly something that many collectors will appreciate. 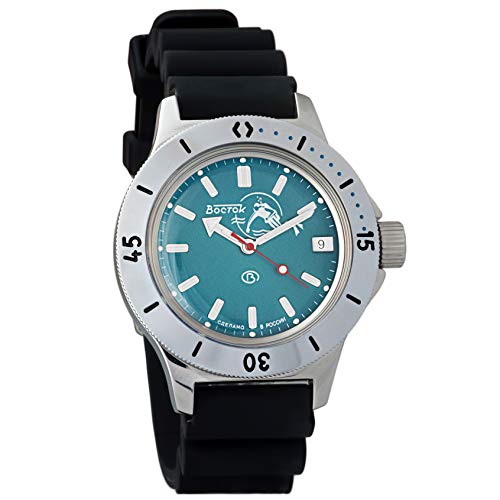 Being a dive watch, the Amphibia Scuba Dude can perform in depths of over 200 meters. With a sub $100 price, this watch is a steal.

Vostok Watches Review: Are They Any Good?

We end this Vostok watches review with our recommendation.

If you are looking for a luxury watch that nails every aspect of the design and features, then Vostok watches isn’t up your alley. However, if you’re in the market for a cheap but durable watch with an interesting history, you should check out what Vostok has to offer.

Ultimately, Vostok is just a solid watch brand and their watches should be worthy additions to any collection.