While not as popular as other Swiss watch brands, Victorinox is a brand name that deserves respect. The brand has been around for more than a century but most people know it as the one responsible for creating the trusty Swiss Army knife.

Victorinox is indeed a fairly new watchmaking brand. However, with generations of success, Victorinox is a brand that many watch collectors can’t afford to ignore.

For today’s Victorinox watches review, we’ll take a look at the history, pros and cons, and the best models this watch has to offer.

The History of Victorinox Watches

The company Victorinox Swiss Army (abbreviated as VSA) was founded by Karl Elsener in 1884. The name Victorinox was actually derived from Elsener’s mother’s name – Victoria, and the “inox” is the French word for steel. However, it wasn’t until the 1920s that the name materialized.

In 1890, the Swiss Army started buying pocket knives to equip its soldiers. A part of this lucrative government contract was won by Elsener.

Switching over to the United States, the company Charles Forschner & Sons was founded in 1855 in New Britain, Connecticut. The brand was making butcher scales. In 1877, Forschner died and his son Richard changed the name of the company to RH Forschner and moved its operations to New York. The company started supplying butcher knives in 1921.

In the 1930s, RH Forschner started looking for alternative suppliers and eventually started buying knives from Victorinox. This relationship flourished and soon, Forschner gained exclusive rights to sell Victorinox knives in the States.

In the 1989, the wristwatch “Swiss Army” was launched and became a great success in North America. From this point, Victorinox was not just known for its heavy-duty pocket knives but also high-quality Swiss watches.

The Victorinox Swiss Army has a long and complicated history. If you want to go in-depth, we highly recommend that you check out this post from Victorinox. It’s pretty compelling stuff.

Are Victorinox watches worth checking out? We break down the things that we love and we don’t love about this Swiss watch brand. 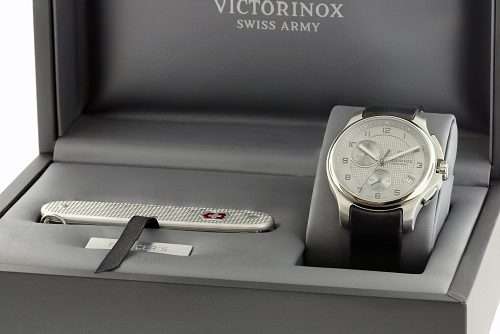 Many folks are familiar with the Victorinox brand of watches but are surprised to learn that they’re the makers of the venerable Swiss Army Knife.

Victorinox is not exactly a forefront name when it comes to timepiece innovation. If you are a big fan of horology, Victorinox’s history will not be your cup of tea. However, it’s still interesting to know how a pocket knife maker turned into a respectable watchmaking brand.

After all, Victorinox has been around for more than 120 years. Therefore, history buffs and avid collectors will have a field day when looking at what this Swiss brand can offer, history-wise.

Victorinox Swiss Army is not just a Swiss brand, it’s a watchmaking company with a long and rich history. 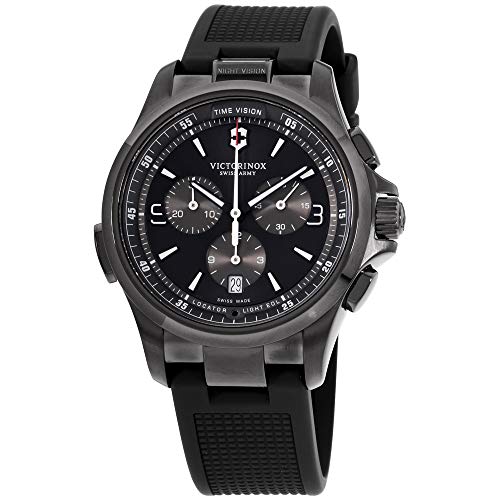 Victorinox watches are about as tough as they look (more on the toughness aspect later). Many of my Victorinox timepieces feature a rugged design which resonates well with me. Many of their designs are fairly simple but they do pack a lot of visual punch.

Despite the simple overall design, what really stands out to me is Victorinox’s attention to detail. It’s almost as if every facet of the watch is lovingly crafted. Victorinox timepieces boast great details, adding depth to the overall visual appeal. I love how clean and textured Victorinox watches are.

Plus, these watches really look like they could take a beating. 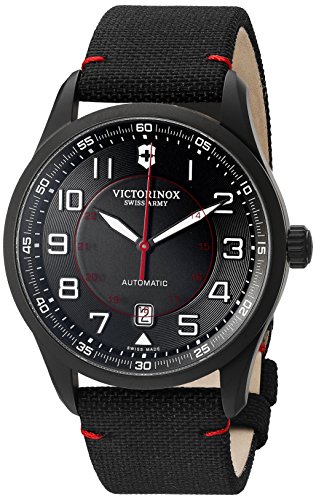 Victorinox timepieces will last you a long time. The construction quality of these watches is on-point. These watches feel tight, robust, and gives off a high-quality feel. Speaking of quality, Victorinox watches generally are made from high-quality materials.

With that said, I would highly recommend Victorinox watches if you are looking for a daily beater timekeeping tool. Aside from the fact that they are durable, they also look good enough that you can wear them all the time. They’re not called all-terrain watches for nothing.

Apart from a few luxury pieces, the core collections of Victorinox are mostly budget-friendly – at least as far as Swiss watches go. The most popular Victorinox pieces are available for less than $500. You can even find an entry-level model in Amazon that goes below $100.

As a result, getting a Victorinox watch is a good entry-level point into Swiss watches. There’s nothing amazing when it comes to internal features like movement but you’ll get a solid good watch nonetheless. Due to the great price point, Victorinox watches are also excellent gifts for people who don’t wear watches.

I gave my dad a Victorinox Swiss Army Maverick and he loved it.

While checking out what Victorinox has to offer, the brand is already looking good. Victorinox is already a fairly known brand, even way before their days of manufacturing watches. I’ve owned several Victorinox Swiss knives, so I already know what to expect with their watches.

Having said that, Victorinox is a brand with an established history and legacy. You’re not exactly gambling with an obscure brand if you choose to go with Victorinox Swiss Army.

What We Don’t Love 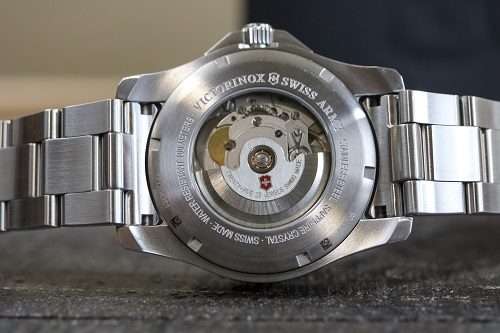 If you are looking for pieces with expertly crafted mechanical movements, Victorinox is not the brand for you. Most if not all Victorinox models house a Swiss quartz movement which is about as low-end that you can get as far as movements go.

Don’t get me wrong, Victorinox watches are accurate, thanks to its reliable quartz movement. However, these watches don’t exactly pack advanced features that most modern watches have but that’s fine by me.

Don’t expect these watches to be marvels of horology.

Not Solely a Watch Maker

Although Victorinox has already proven itself in the watch industry, it’s hard to ignore that they’re exclusively a watch company. While it’s not that much of a problem for me, I know some people who won’t give this brand a chance just because they’re not solely a watchmaking company.

On the other hand, some people are also accusing Victorinox of diluting the brand by making other products aside from watches. They are already a respectable knife manufacturer. Many feel that the addition of other products like clothing, fragrance, and luggages diminishes the brand.

This Victorinox watches review won’t be complete if we don’t highlight the best models this brand has to offer. 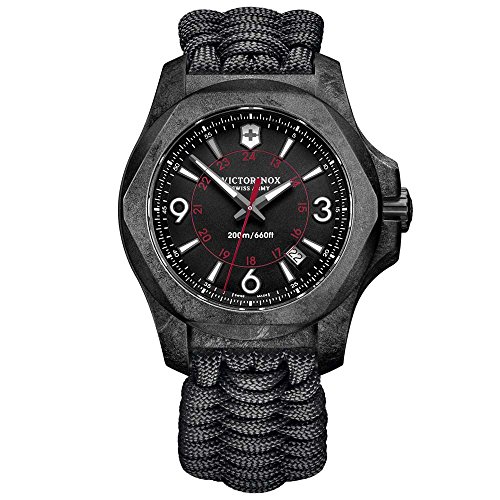 Most people have a Victorinox as their first pocket knife. The Victorinox Swiss Army I.N.O.X. Carbon is created in the same spirit as the famous Swiss Army knives.

The “tacticool” design is certainly a stand out, especially with the paracord strap. The strap adds a great deal of personality to the INOX – it looks amazing on-wrist. Whether you’re an outdoor person or the military type, the design of this watch will impress you.

The main draw of this model is the Carbon Composite material. This material makes the INOX highly durable but also hypoallergenic and lightweight. The case does have a “plastic” feel to it but that’s only due to the carbon material.

The Victorinox I.N.O.X. Carbon is one of the best military watches and it has certainly earned that spot. 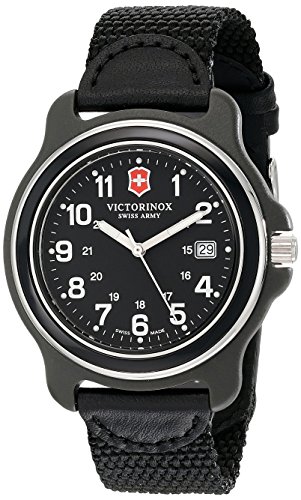 The Victorinox 249087 Original XL is the perfect entry-level option to this Swiss brand. During its release, it became quite popular which is why it re-imagined and relaunched.

The Victorinox 249087 Original XL is a no-nonsense analog watch with a simple dial and overall design. Sometimes, you just need a watch that works and the Original XL fills that requirement beautifully. The dial looks very readable with lumed hands and markers.

It comes with a nylon band which surprisingly feels comfortable. The durability is on-point, making it an excellent beater watch. Finally, the watch comes at a great price. Tremendous value! 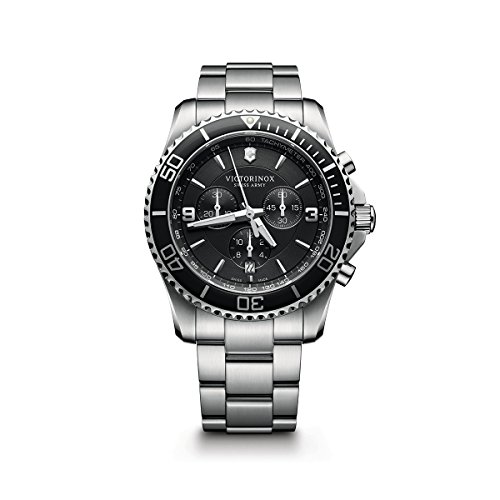 Now, for a high-end offering from Victorinox, we have the Victorinox Maverick Chronograph.

This watch stands out due to its classic, sophisticated look. It’s the type of watch that you can wear every day but dressy enough for gala events. Victorinox has managed to strike a balance between function and form. It’s a good-looking timepiece, especially with the beautiful gray dial and subdials.

It comes with a stainless steel bracelet which feels comfortable and secure. However, the entire watch does feel a bit heavy-handed but it’s not much of a big deal. Unfortunately, the snap-in clasp mechanism is flawed. The clasp is a chore to operate.

Lest we forget, the Victorinox Maverick Chronograph is a dive watch with a 10 ATM (100 m./330 ft.) water resistance rating. It’s not exactly one of the best dive watches that you can buy but it’s nevertheless a respectable effort from Victorinox.

Victorinox Watches Review: Are They Any Good? 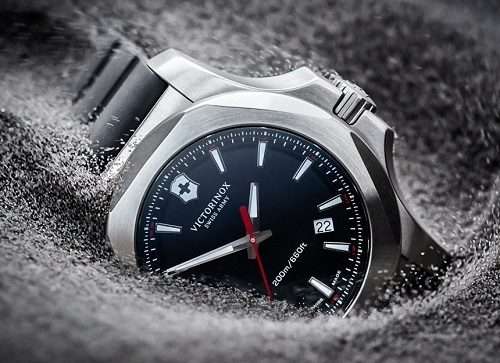 Let’s wrap up this Victorinox watches review with our recommendation.

Should you bother with Victorinox watches? Absolutely! The Swiss brand offers plenty of timepieces that are both great looking and functional. Victorinox watches won’t exactly blow anyone’s mind but they’re great entry-level options for the realm of Swiss watches. Ultimately, these watches are excellent value for the money.