Popularity spanning well over a century and a half, Tissot watches have adorned the wrists of royalty, actors, and sports stars. With a rich history and quality watches, Tissot continues to dominate its industry. We’re going to look at the Tissot Watches review and its greatest qualities through a few of their watches. That way, you can decide if a Tissot watch should find its home on your wrist. 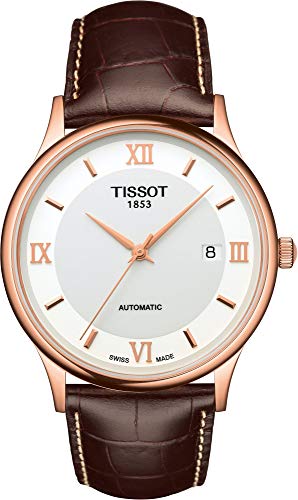 Tissot has been at the forefront of many great watch revolutions throughout its history. Among the first to follow the path of smartwatches, in 1999 Tissot released its first T-Touch watch. It had a touch screen and a combination of an analog and digital face. Tissot has continued to advance its technology, producing more T-Touches, like this T-Touch Expert Solar—a beautiful example of Tissot’s touch technology. 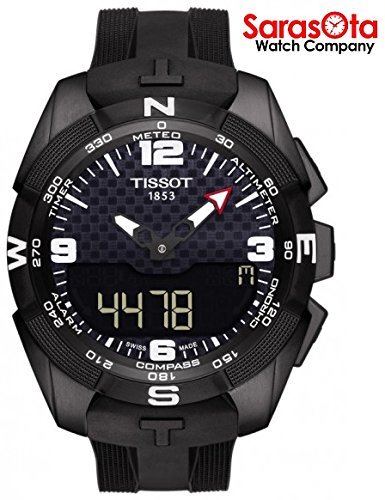 This Tissot Men’s T-Touch Expert Solar watch has a lot of features in a compact but beautiful package. The case is 45mm in diameter and made with black titanium. The strap is black rubber and the movement is Swiss-Quartz. The greatest features, however, revolve around the pioneering aspects of Tissot’s technology.

This watch is not only touch-screen but is also powered through solar energy. The watch has many functions as a chronograph, which include a timer, compass, alarms, and more. It also has a calendar with day, date, and month information. The hands and markers are luminescent for easy visibility even in the dark.

Additionally, the watch is durable and will allow the wearer to enjoy it in many conditions. The sapphire crystal window is scratch-resistant and the watch itself is water-resistant up to 330-feet, meaning it can be worn while swimming, snorkeling and showering but not while diving.

Users love the durability of this watch, along with the visibility of the dial’s information. One customer also loves that while it may look large, the watch is light and comfortable to wear so that one barely realizes it’s on. Overall, for anyone who likes to have a high-tech watch that will accompany them in many settings, Tissot is a great go-to. Its technology and quality allow for flexibility and reliability. The T-Touch Expert Solar encompasses Tissot’s footprint in watch technology.

Along with great technology and quality, Tissot also produces elegant pieces. For both men and women, Tissot’s watch designs can be perfect for everyday tasks, work, and as a luxurious accessory for an elegant night out.

Tissot’s watches allow for luxury in a neat, delicate, and stylish way without being overwhelming. One of the best samples of these watches is the Tissot Femini-T Mother of Pearl Dial ladies Cream Leather Watch—a slender, beautiful piece. 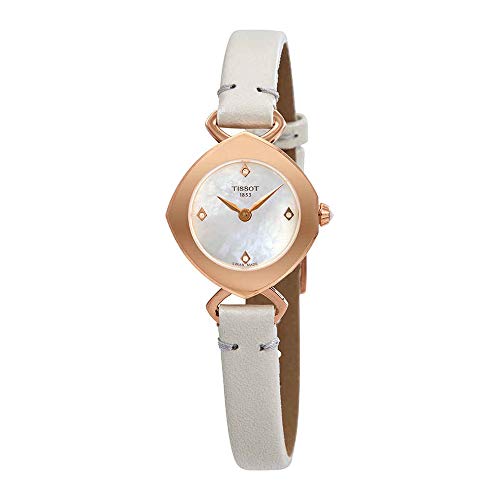 The Femini-T Mother of Pearl watch is a great example of a dress watch that is adaptable but has many striking features. The dial is a mother of pearl and the 22.58mm case is made of PVD stainless steel with a rose gold color. The hands are also of a rose gold-tone. The band is made of white leather. The analog display has quartz movement and the watch is resistant to water up to 30 meters. The watch is protected by a scratch-resistant sapphire crystal window.

The real attraction to this watch is in the priceless detail, which includes diamond hour markers at the 3, 6, 9, and 12 o’clock positions. The rose gold tones, mother of pearl dial and the diamond markers all come together in a watch that, from afar seems simple, but up close is pure elegance.

Not everyone wants a watch that overwhelms them with a myriad of information on a small dial. Nor do they always want a watch with glints of diamonds. Sometimes, they want a traditional wristwatch with a style that compliments their own, which they can wear through any major events in their lives—be they promotions at work, a party with friends, their wedding, or a fun hike. A traditional wristwatch is a classic addition to many a wardrobe and Tissot has plenty of great options, including the aptly named:Tissot Men’s Tradition. 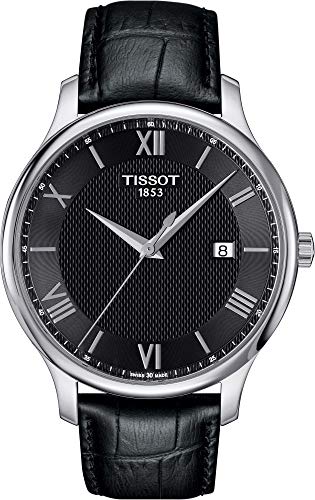 The Men’s Tradition watch has a clean and adaptable style. With a large dial that makes it easy to read the stylish face, this watch wants to make its wearer’s life as easy as possible with its simple style.

The stainless-steel case is large with a diameter of 42mm. The band is of leather calfskin. The display is analog with Swiss quartz movement. The dial itself is a beautiful black guilloché and is protected by a scratch-resistant anti-reflective sapphire crystal window.

The open and simple dial is the best part of the watch with its chic Roman numeral and stick indexes. There is also a barely-there date display window. Users love the easy-to-read and classic style. Overall, this is a great example of Tissot’s more flexible traditional watch options.

Creating unique watches for over a century

Tissot created many watches that were unique in appearance and also very unique in the ways they were made. Tissot created a RockWatch made of granite in the eighties and it was followed by the Pearl Watch and the Wood Watch. Tissot’s creativity wasn’t limited to the second half of the 20th century, though. Contrary to what many would expect a quality watch of the early 1900s to look like, Tissot produced a funky rectangular watch—later called “banana” because of its long design in 1916.

The watch features warped-looking numbers. The watch was very popular in Russia during the pre-revolution time. This popular watch is mimicked in the Heritage Banana Centenary, a reminder of Tissot’s creativity and continued popularity through the decades. 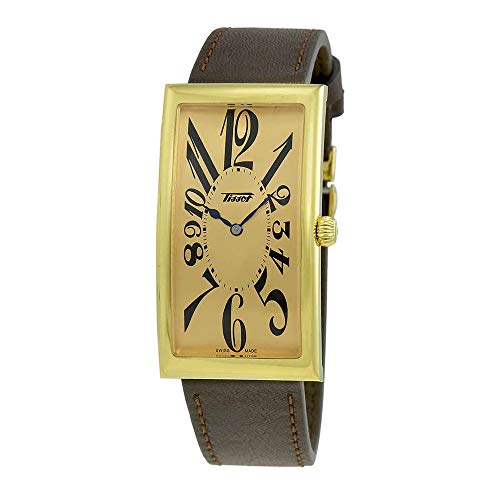 This Heritage Banana Centenary, a fun homage to a Tissot classic, is great for anyone who wants a watch that draws attention. The rectangular gold-tone stainless steel case is 49mm in diameter. The dial is analog with easy-to-see hands. The strap is brown leather with gold-tone touches that match the case and bezel.

The clear stars of the show are the numbers on the champagne-colored dial. The numbers are of all different sizes but are still clear and easy to read. Fashion doesn’t come in the way of this watch’s purpose. There are also minute markers around the inner ring of the dial. They are small and elegant within the shadow of the bigger-than-life hour markers.

This watch is not for the faint of heart. It draws in the eye and provides a fun way to tell time along with paying respects to Tissot’s continual watch creativity and great overall history.

Tissot was founded in Switzerland by Charles-Félicien Tissot and his son Charles-Émile Tissot in 1853. When the younger Tissot went to Russia, he introduced the brand to the entire empire. Tissot even delivered a watch to the last Czar of Russia, Nicholas II in 1904.

Tissot grew in popularity in the world of sports timekeeping for skiing during the mid-20th century. Its presence in the sports world only grew. Throughout its history, up to modern times, Tissot has been prevalent in the world of sports, timing many world championships like those in cycling and ice hockey.

In 1930, Tissot merged with the company Omega in order to form SSIH, which later merged with ASUAG, evolving into the Swatch Group. Post—World War II, Tissot continued to grow and evolve.

Tissot has had many great landmarks throughout its history. A few of the more notable landmarks include releasing the first pocket watch that had two time zones, the first anti-magnetic watch, and Tissot’s first T-Touch watch, which really put Tissot on the map in modern times. Tissot has also been worn by many celebrities and can be seen in major movies in the last few years

Tissot began small, like many great watch companies. But it continued to grow throughout the years, making its mark in modern society, major sports, movies, and even in royal Russian history.

Tissot is a quality brand that has only continued to prove itself through the years. With its adaptable style, almost anyone can find a Tissot watch that will work for them. Throughout its history, Tissot has reliably produced elegant watches for men and women. Additionally, most Tissot watches are reasonably priced. With Tissot, you can find a quality, a great history, and a good price. What’s not to like?