We’ve researched the top picks for you, so that you can compare the best watches that Snyper has to offer at a glance. Overall, we think that Snyper is a great buy because of the exceptionally high-quality materials used, plus they look great. But we also weigh the pros and cons of choosing Snyper over other similar brands at the end of this review.

While any wristwatch will make you appear more professional, and outside of work, they’re a fashion accessory that enhances any outfit you’re wearing. Is a Snyper watch right for you?

Snyper watches are a high-end, Swiss-made watch brand designed and assembled in Geneva. Inspired by the high-budget, ultra-high-tech military-grade equipment used by snipers, these wristwatches claim to embody the physical and mental strength of an elite class of warriors. In fact, the company refers to its lineup of wristwatches as “the Snyper range.’

Like a hybrid crossover between ultra-luxury top brands like Rolex, and the original functional purpose of wristwatches in the first place, Snyper boasts a vast array of wristwatches which look great, and will most likely serve your needs to tell time, or just show off your awesome watch.

While everyone has different needs, Snyper offers a broad range of diverse models for their men’s wristwatches. Some might set you back more than the cost of a new car, while others were designed with the same high-tech functionality but without the bling.

Read on to find out what we think about: 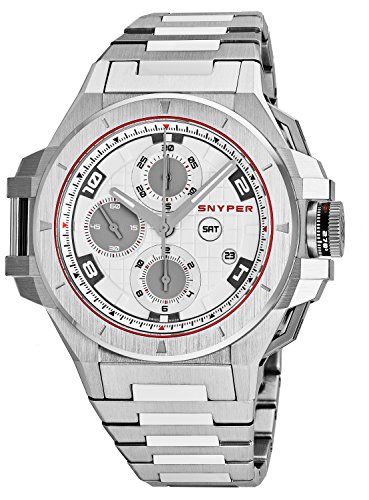 If you’re going to get a high-end wristwatch, it might as well look like you’re making six figures per year. The Snyper Ironclad Men’s Automatic Chronograph Watch with Diamonds is that watch.

The scratch-resistant, anti-reflective crystal face reveals a polished metallic and black palette offset with a royal red that looks like money. Under the silver-toned luminescent hands are an additional second hand, a thirty-minute counter, and a 12-hour counter. 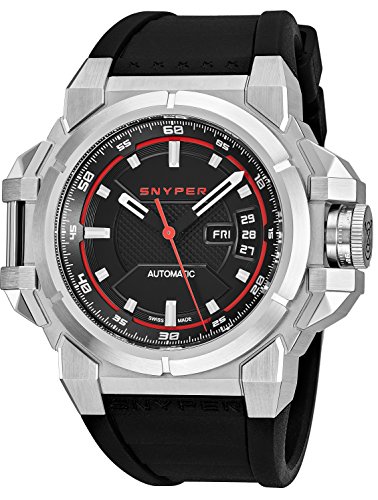 When you require function over form, and need the extra-rugged durability of a rubber watchband, and water resistance up to 100 meters/330 feet, then the Snyper ‘Two Steel’ Swiss Made Watch is your go-to daily sports and activity watch of choice. This model boasts the same reliability of the Snyper brand, while allowing a little more flexibility with budget by not adding a bunch of diamonds to a watch you’re likely to take on some active excursions involving water sports.

Overall the look is very appealing without screaming for anyone’s attention. One really cool aspect of this watch is that the numbers around the dial are the seconds, which aren’t just broken up into 60 seconds, but so precise that each second has 4 microseconds built in between.

We half expected this watch to include a laser, but it’s still an invaluable asset if you’re going for that James Bond look. 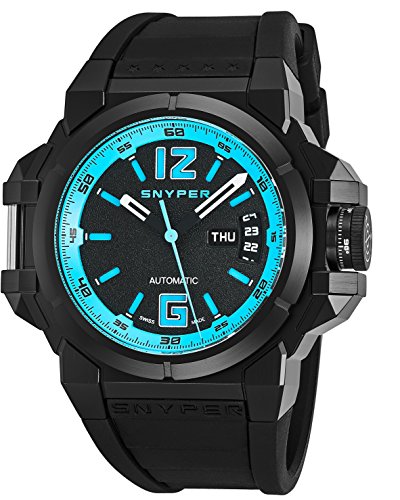 The Snyper ‘Two Navy’ wristwatch is just the right amount of aquamarine to stand out while scuba diving up to 100 meters, or 330 feet, yet still appear sleek while walking on the street. The rubber wristband allows for non-slip water play without worrying about ruining your investment.

The day and date are clearly displayed at the 3 o’clock, under the scratch-resistant, anti-glare sapphire crystal face. The extra-large 12 and 6 hours allow easy access to telling time at a glance. 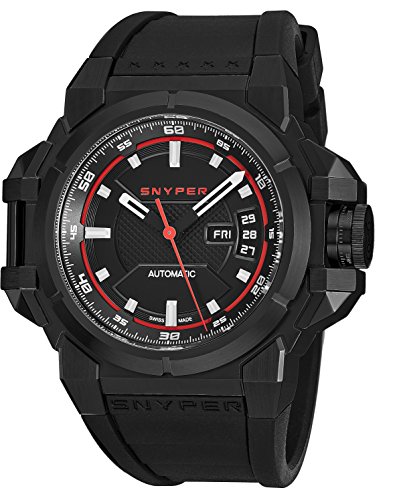 Like the younger brother watch, the Snyper ‘Two Black’ foregoes fancy for fun. Mostly black with red highlights, it appears to be in stealth mode at all times.

This watch displays the minutes, not hours, in Arabic numerals around the face. The rubber watch band will endure a sweaty outing, or workout, as well as not pinching any forearm hairs as a metal band will.

You can find the day, and date on the right-hand side of the face, while the far left of the watch has a special pop-up compartment with a flame style lighter module which may be useful for lighting your cigar.

The most expensive (by far) and second to least aesthetically pleasing watch is the Snyper Tourbillon F117 Titanium. With a font on the dial that resembles comic sans, they decided for two colors – white and red – but only three numbers. The ‘6’ is mysteriously absent here.

The band material is inexplicably rubber, as though you would be wearing the equivalent of a brand new car around on your wrist while you were playing sports. Possibly more mysterious is why the beautifully polished titanium appears broken due to the center display being open so you can see the gears in the lower fourth of the watch face.

While they boast that this F117 watch is inspired by military aviation and is limited to only 25 pieces, we can’t help but wonder if there was any other inspiration source for the limited production. 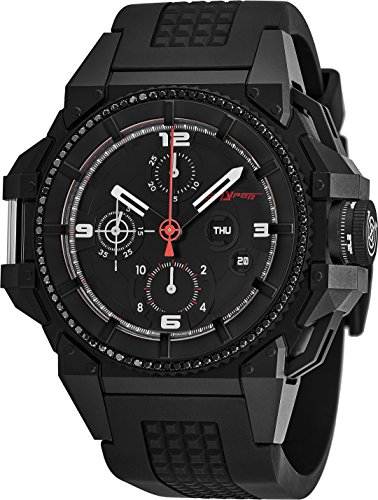 The Snyper ‘One H’ model offers that sleek black with white text and red splashes, while offering a number of tiny windows that include: the day, the date, an extra second counter, a thirty-minute counter, as well as a 12-hour counter.

Though the strap is rubber, the hefty dial gives a manly weight to this watch. This seems like the most basic Snyper model in terms of looks, design, and function – yet pricewise it’s not the cheapest. While this would be a fun watch to wear, we can’t justify a higher price tag for the cheaper and even more awesome ‘Two Black.’ 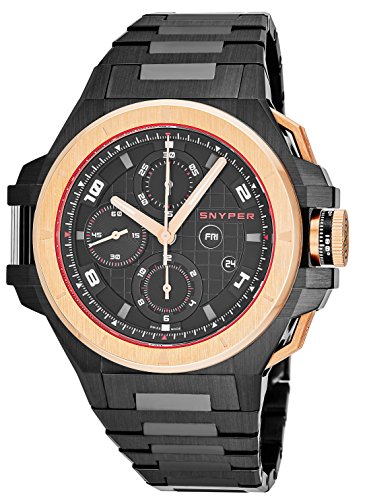 With the Snyper Ironclad Bicolor Rose Gold, leather and Rose Gold clash to create somewhat of an eyesore with too much contrast to look good. While this watch boasts the same engineering and durability of other Snyper watches, we can’t recommend this for any gentlemen who take themselves seriously.

Rose Gold is a cool color for your girlfriend’s iPhone, but not so much for a men’s wristwatch.

Should you get a Snyper watch?

Snyper offers a number of features that are pretty standard in the luxury men’s wristwatch, and some unique selling points that we don’t usually see in other watches. But with their high quality comes a price tag to match, so we’ve created a list of things we loved, and things we felt were lacking.

The pros of Snyper watches:

The cons of Snyper watches:

Snyper has an awesome range of watches to choose from, with some models that really shine. But if it’s just not your thing, there are plenty of other men’s wristwatches out there.

If Snyper’s luxury look, and Swiss made style is more your thing, then you should check out the Oris line of men’s wristwatches.

And if you want that sleek, simple look like Snyper’s ‘Two Black,’ then click here to find out more about Victorinox’ line of men’s wristwatches.

Thank you for reading our review on Snyper brand men’s wristwatches. We really hope you find the perfect watch for you. If you enjoyed this article, share it on your social media so your friends can enjoy it, too!