One of the most common criticisms about Rolex is that their watches tend to look the same. To some extent, there’s a truth to this sentiment and it applies to both Rolex’s historical timepieces and contemporary models. However, Rolex’s meticulous consistency is what made it one of the largest luxury brands in the world.

Therefore, many people are caught off-guard when they see something as unorthodox as the Rolex Air King.

Today, we’ll take a long hard look at the Rolex Air King. The Air King is widely considered to be the Swiss luxury brand’s entry-level pilot watch but is it worth the entry-level price tag? 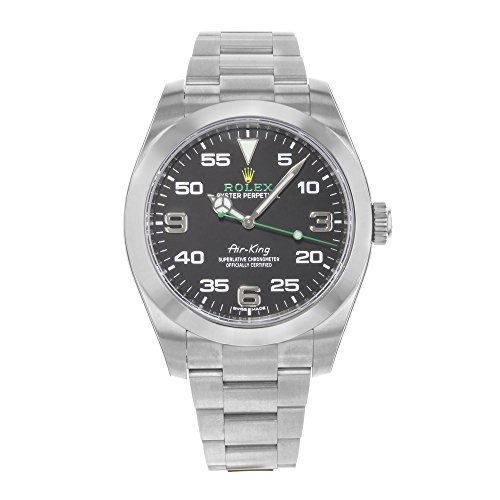 As mentioned, the Air King is the least expensive model in the Rolex line. For this review, we’ll focus on the Rolex Air-King ref. 116900 model. But first, let’s see the key specs and features. 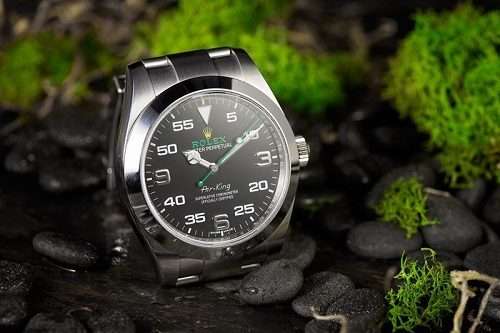 The Rolex Air King is perhaps the most confusing Rolex I’ve ever owned.

It’s worth noting that the original design of the Air King was very simple and in some ways, a very purist Rolex. I mean it has no date aperture, it comes with a water-resistant case, chronometer, and a screw-down crown. It had the most essential Rolex elements without the distractions.

However in 2016, Rolex released an Air King version (reference 116900) which was a significant departure from the original design.

If you are familiar with the old Air King design, you’ll find the new design to be quite extroverted. The rather unorthodox design is mainly seen on the dial. The new Air King’s dial is uncharacteristically colorful and is somewhat busy when compared to other iconic Rolex models such as the Submariner and Datejust.

I must admit that the 116900’s overall look takes a bit of getting used to. The old Air King’s popularity was mainly attributed to its simplicity and robustness. I have to say that Air King still has those qualities with an extra touch of personality.

However, as with any drastic changes to time-tested Rolex designs, to say that the latest Air King is polarizing to timepiece collectors would be a severe understatement. 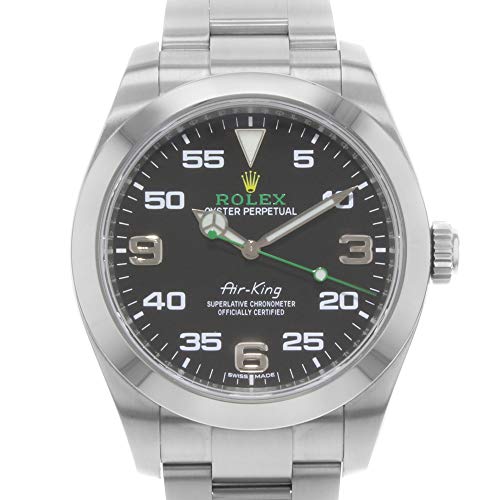 It’s hard not to agree that most of the confusion about the Air King lies with its satin black dial. The new Air King retains the black dial but with some strange design elements introduced.

First off, the dial features applied, Arabic numeral markers with the familiar Rolex Explorer layout. The Arabic 3, 6 and 9’clock markers are fitted in polished white gold, and the 12 o’clock marker is an inverted triangle which is also fashioned in white gold. The rest of the dial’s layout takes a strange turn as the rest of the hour markers go from ‘5’ to ’55’, only interrupted by the Explorer layout.

While this is a layout that divided many fans, I personally like this design as it reminds me of a cockpit indicator. Some people may not like the layout but it certainly looks like a pilot watch for the most part. With that said, legibility is excellent with its bold and unapologetic dial. The addition of the Chromalight lume makes readability a non-issue even in dark environments.

Another noteworthy departure is that the Rolex name is printed in green font and the familiar Crown logo is printed in yellow. Above the 6 o’clock sits the stylized Air King text with the Superlative Chronometer Officially Certified text below. I have to admit that I was taken aback by the logo designs but they certainly grew on me.

Like it or not, this enigma of a dial is what gave the Air King its distinct identity. 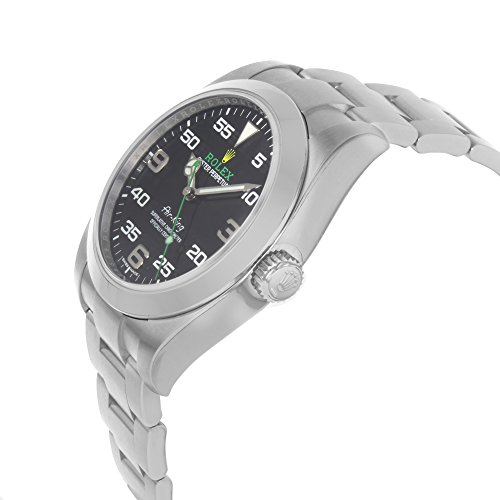 If you think the shape of the Air King’s case is familiar, it’s probably because it reminds you of the Rolex Milgauss case. Well, the Rolex Air King 116900 uses the same Milgauss case which means that the watch is protected from magnetic fields.

Both the case and the bracelet is made from the signature 904L grade stainless steel and boasts a stunning satin finish. However, it’s worth noting that the Milgauss’ bracelet features a PCL (polished center link) bracelet while the Air King is all satin.

The Air King case has a thickness of about 13mm which is roughly the same thickness as the Omega Speedmaster. While it might be a bit too thick for some people, the Air-King never felt bulky or unwieldy. It’s safe to assume that the thickness is due to the anti-magnetic shielding. 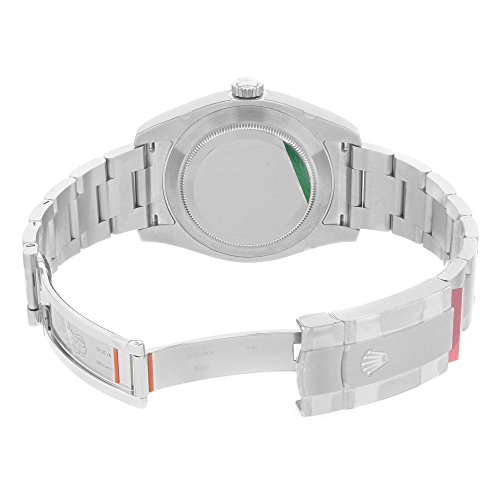 As you might expect from a Rolex timepiece, the Oyster bracelet and folding Oyster clasp provide the much-needed ease of use. The bracelet is noiselessly smooth and operates reliably. I have no issue with comfort as well and it’s like wearing silk instead of steel. It’s a fairly hefty watch but Rolex did a good job with weight distribution. The signature Easylink adjustable extension links go a long way to ensure an excellent fit.

It never felt that the Air King is weighing me down.

This isn’t a Rolex Air King Review without talking about the movement. With that said, the Air-King is powered by the self-winding mechanical movement, the Caliber 3131. Again, this is the same exact movement used not just for the Rolex Milgauss but for the Rolex Explorer as well.

The movement operates at a frequency of 28.800 vph with a 48-hour power reserve. As mentioned, the movement is protected from electromagnetic fields. The inclusion of the blue paramagnetic Parachrom hairspring adds further magnetic protection and toughness to the watch. This pretty much ensures that the watch will be precise and reliable even when you’re on a flight.

Like with most Rolex models, the Air-King promises -2/+2 sec/day precision. The Caliber 3131 movement may not have the same fanfare as with the new Chronergy escapement, it’s a solid movement that offers good precision and some nice features.

As I have mentioned earlier, the Rolex Air King is the brand’s less expensive model. It just edges out the updated 39mm Explorer in terms of affordability.

So is the Air King worth the entry-level asking price?

In my opinion, the Air King is as close as you can get to a proper Rolex sports watch. If you are looking for a darn good pilot watch with the signature Rolex polish, then this watch is more than worthy of its price tag. Would I go as far as recommending this for would-be first-time Rolex owners?

Well, that’s a bit of a tricky question.

While the old Air-King is considered a classic, the Air King 116900 looks nothing like the original design. For all extents and purposes, the Air-King is a handsome watch. However, it doesn’t really scream Rolex. I imagine that most people who are looking to own their first Rolex is aiming to buy into its heritage.

With its enigmatic design, the Air-King looks nothing like your classic Rolex. However, it does have the iconic Rolex polish and reliability.

In its current price point, the Air King is not worth the entry-level price if you’re looking to own a traditionally designed Rolex. On the other hand, those who are looking for a Rolex watch with plenty of personality, I highly recommend this watch – it’s practically a steal.

Should You Get the Rolex Air King? 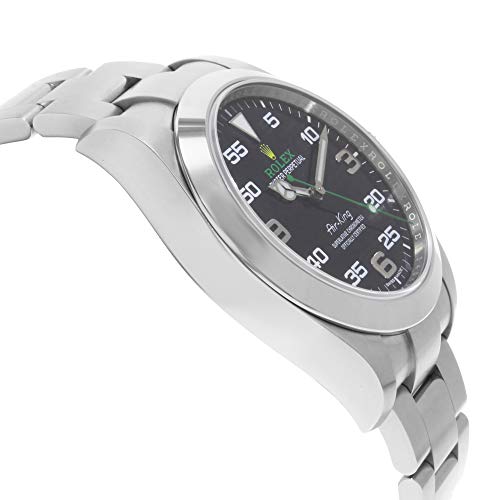 We conclude this Rolex Air King review with our verdict.

To be quite honest, the Rolex Air-King Reference 116900 didn’t really make me excited at first. However, the more I look into it, the more endearing it gets. It’s a watch that’s all about risk-taking and needs to catch your attention. While we celebrate Rolex for the brand’s reliability and consistency, the Air King reminds us that it can still venture far from its comfort zone.

The Air King is also a fairly versatile piece that can cater to a wide range of needs. I have worn this watch from sportier activities to dressier events. It looks great, wears comfortably, and offers excellent reliability. Legibility is also on-point and remains true to the spirit of the best pilot watches.

The Air King is clearly targeted towards younger users who are turned off by the classicism of the Oyster or the omnipresence of the Submariner.

Many collectors have turned up their noses with the idiosyncrasies of the Air-King but I think its polarizing aspects are its greatest strength. This is a Rolex that dares to stand out from the rest of the crowd.

Is the Air King too much of a departure from a classic? Or is it a fresh take on a classic? Regardless of what we think, you really can’t fault the Air King for being dull and boring.