The Rolex Air King is truly the vintage Rolex for the purists. While the Air King is not as popular as the Submariner, GMT-Master, and Day-Date, it’s one of the older collections of Rolex with a rich history. The history of Rolex Air-King dates back in 1945 during World War II.

What made the Air King such an iconic timepiece is the simplicity of the dial and precise timekeeping.

For this Rolex Air King 5500 review, we find out if this vintage model is worth adding to your collection. 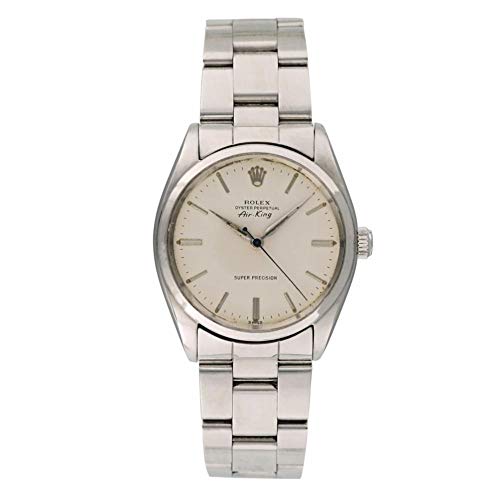 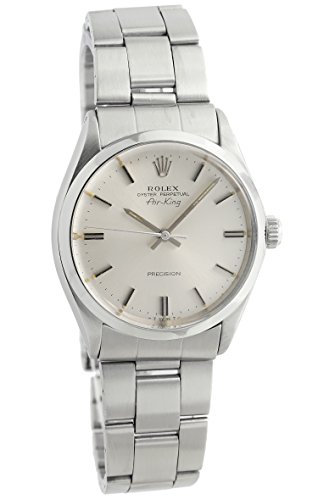 The Air King collection has always fascinated me due to its storied history. The Air King was introduced alongside names like Air Lion, Air Giant, and Air Tiger – all of which have flamed out. Rolex originally made the Air King as another spin to the Oyster Perpetual to honor the RAF Pilots who served during WW2.

The Air King is not exactly a popular model among enthusiasts and collectors but there are still many budding enthusiasts that do want it. Since this timepiece continues to fly under most people’s radar, even the most vintage Air Kings are sold at reasonable prices.

This is what made me decide to give the Air-King a well-deserved spin. It has a great history and good price, it’s hard to pass up on that.

One of the first things I’ve noticed about the Rolex Air King 5500 is the size. Clocking in at 34 mm, the Air King is a petite watch which is fairly common during its era. One look at the Air King and you’ll see that it’s a very vintage piece. It features a very simple and clean look and time-only design.

The design just doesn’t get any more classic than this.

The elegant silver dial is one of the standout design elements here, and the gentle sunburst effect of the dial does a great job of wrapping up the whole look. Aside from the vintage aesthetic, the Air King 5500 is, for the lack of a better word, typical. I know that it’s a classic and it deserves respect but I can’t help but feel merely “whelmed.”

Don’t get me wrong. It’s a very well-made timepiece with a timeless look and provides just what you can expect from Rolex. It just gives me the impression that it’s a piece that’s best for collection purposes. 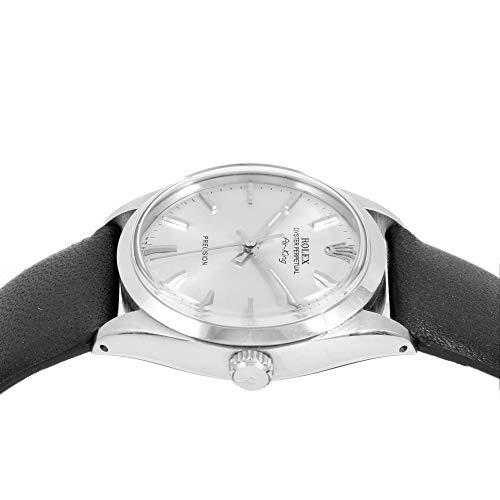 The Rolex Air King 5500 is the definition of timeless elegance. You can tell that Rolex made a watch exactly how they want it.

The 5500 boasts the hallmark traits of a Rolex without a single overdone feature. The minimalist good looks make the Air King such a versatile timepiece. Regardless of the purpose, whether it’s daily wear or something dressier, this is a watch that will never go out of style.

As mentioned, the main selling point of the watch is its elegant silver dial. The sunburst effect in the middle of the dial sure adds a lot to my enjoyment of the watch. The sharp, applied indices are elegantly detailed and are topped with small lume plots along the edge of the face. This is a common Rolex design element during that era.

The hands aren’t particularly mindblowing and look like your typical baton hands. The half part of the hands is fitted with lume but not all the way through. The lume is cut short before right before the tip, making the end look like a pencil.

The Air King 5500 is available in many different variants and dial colors which is always a good thing. 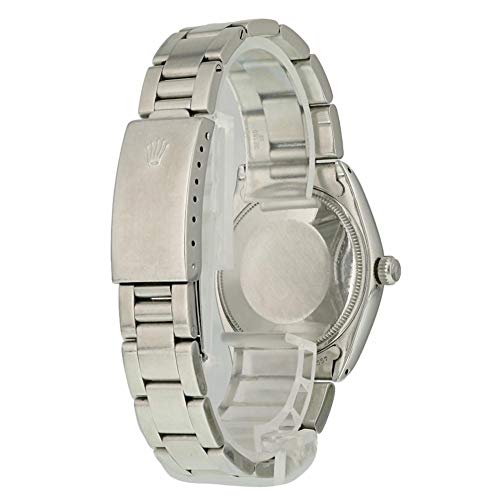 The Air King 5500 is a stainless steel marvel. Despite being a vintage timepiece, it feels solid and robust which gives me a lot of confidence. After all, this is a watch designed to honor World War II pilots.

For the case, the 5500 utilizes the iconic Oyster case and screw down crown. According to its official specs, the watch can withstand depths of 50 meters which is pretty good for a watch of its age. In addition, a domed, acrylic crystal protects the dial. It’s not exactly sapphire crystal but you have to keep in mind that the Air King is supposedly and entry-level model.

With that said, the Rolex Air King 5500 offers a surprising comfort which can only be attributed to Rolex’s excellent construction philosophy. The Oystersteel bracelet and clasp work just as expected. It’s not as fancy as some of the more modern Oyster versions but there’s really nothing to complain here.

If you’re looking to wear the 5500 daily, you’re in a good company. The Air King might be vintage but it’s not fragile. 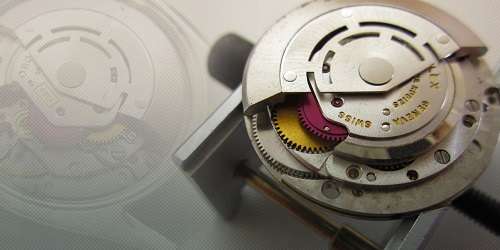 Because of past U.S. import laws that are designed to protect domestic watch companies, the movement inside the Air King 5500 varied. There are two caliber movements found inside the 5500: the 1520 and 1530.

The caliber 1530 features 17, 25, or 26 jewels while the caliber 1520 had either 17 or 26 jewels. Unfortunately, the U.S. and Canada markets have the shorter end of the stick with downgraded movements. One notable example of this is that the 1520 came with the “Precision” text in the dial while with the 1530, Rolex used the “Super Precision” labeling.


However, both movements aren’t exactly the cream of the crop. Both are also not COSC certified. While wearing the Air King 5500, you can actually hear the movement rattling around. Despite that, both the 1530 and 1520 movements are robust and easy to service.

On an interesting note, the most sought out version of the 5500 is the one that features the words Air-King and “Super Precision” in red. There’s also the rare Dominos Air-King 5500 which was used to incentivize franchises that have fulfilled their sales goals. It’s a very interesting collaboration for sure.

Of course, for this Rolex Air King 5500 review, we find out if this watch is worth the money.

The production of the old Air King was halted back in 2014. The new Air King Reference 116900 is a different kind of timepiece and marketed as an entry-level Rolex. Therefore, if you’re going to buy the old version of the Rolex Air King, you’re stuck with resellers and used models.

As I’ve mentioned earlier, the Rolex Air King 5500 isn’t the most popular Rolex watch out there. For this reason, it’s easy to find a relatively affordable Air King 5500 over the web. I’ve had mine for a little bit over $3,000 which is not bad at all for a vintage Rolex.

There are 5500 variants with different bracelets and dial colors that can go a bit higher in price. However, I’ve yet to see an Air King that went over $4,000 except for the Rolex Air King 5500 Dominos version.

For the price, you get a classic Rolex with a rich history. It’s also quite robust and versatile. 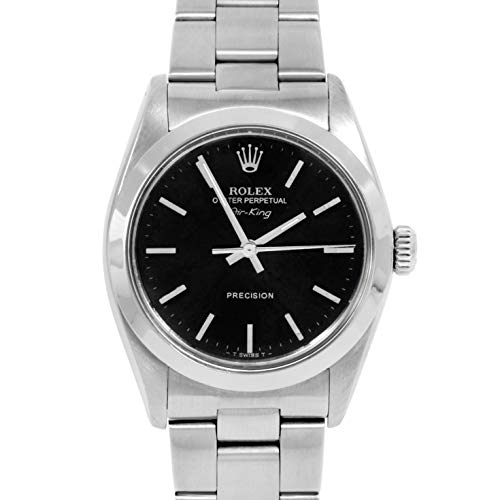 We end this Rolex Air King 5500 review with our verdict.

I’ve had the Air King 5500 for quite a while now and I’m honestly very fond of it. Sure, it’s not exactly a watch that goes into my regular rotation but I understand what Rolex is trying to accomplish here. In some parts, the 5500 is outdated and it doesn’t even have a mechanical movement for the avid horologist. However, its classic good looks can hold its own, all things considered.

Obviously, the best aspect of the Air King 5500 is the price. It’s a good Rolex to consider if you want a watch that won’t break the bank. However, I simply can’t recommend the Air King 5500 for new collectors and Rolex first-timers. Rolex has plenty of amazing watches under its belt and the 5500 is not even close to a contender.

If you want an entry-level Rolex, the Air King 116900 might be the better option. Rolex had fun with the 116900 and it has more features. It’s a polarizing watch but it’s a good first watch for any budding collector, as far as entry-level Rolex watches go.

Overall, the Air King 5500 is not without its charm. This collection has some pretty interesting variants that are difficult to find – royal logos, jeweler stamps, and company logos come to mind. The Rolex Air King 5500 offers a solid value proposition for anyone who’s looking to dive into vintage Rolex.